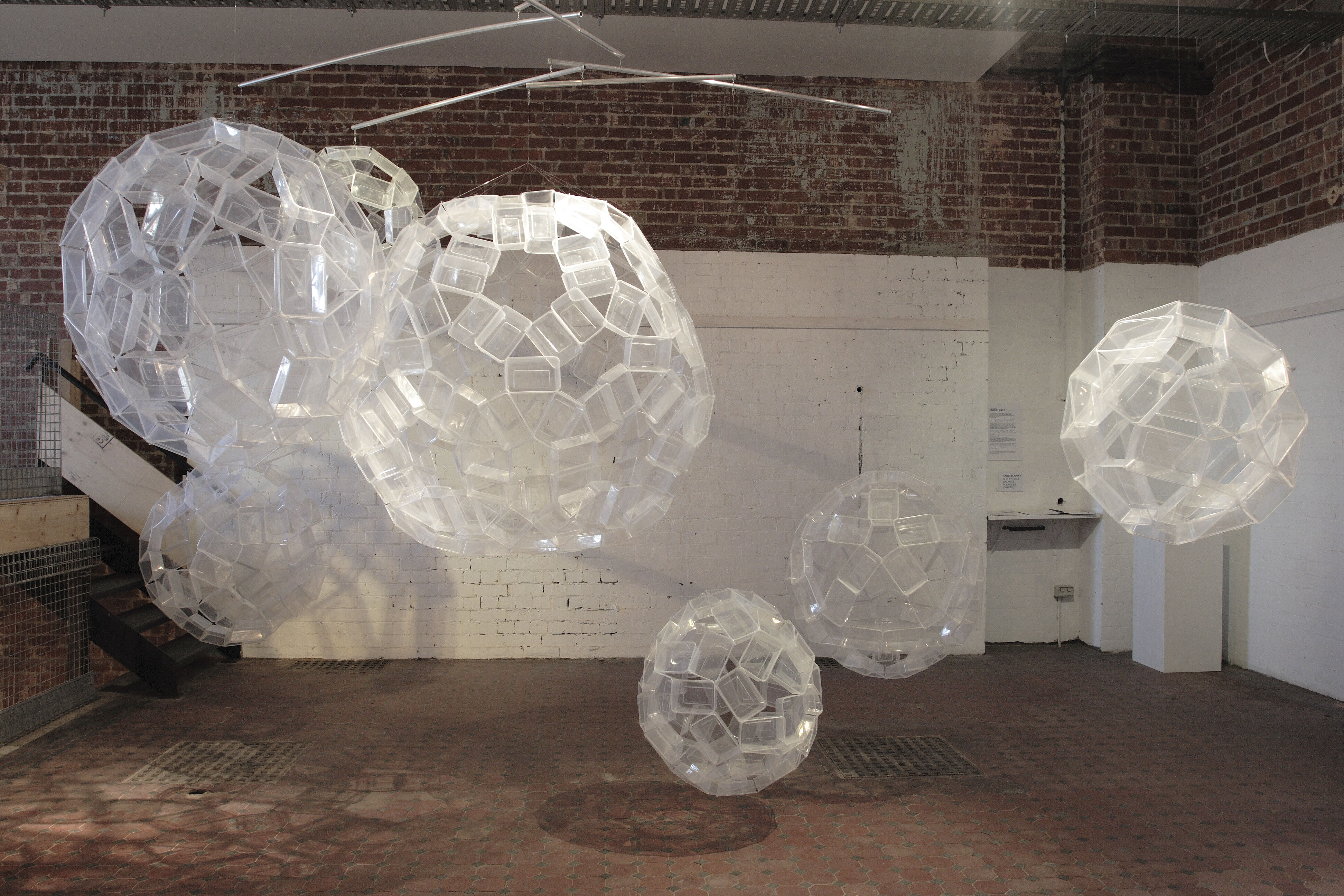 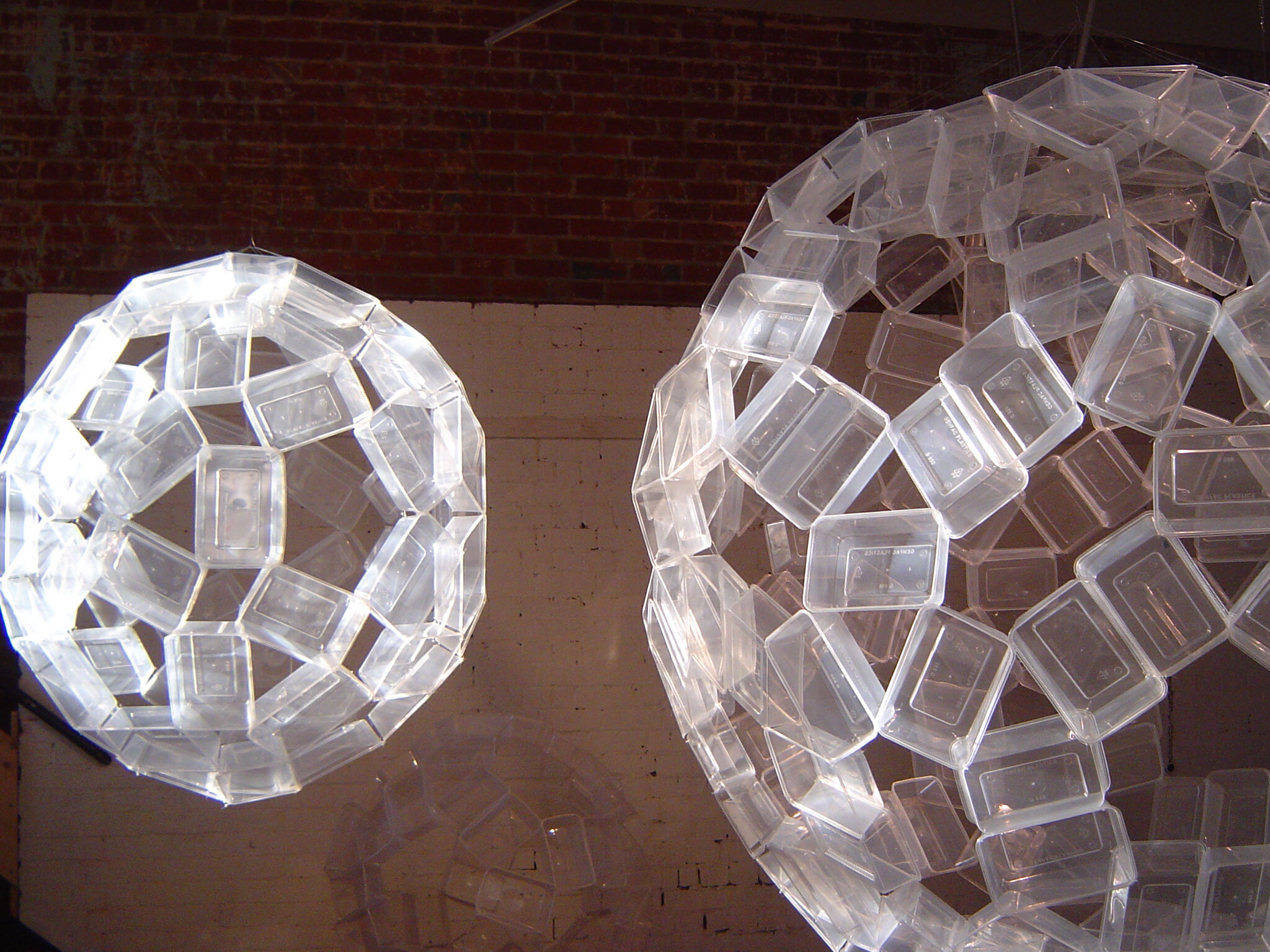 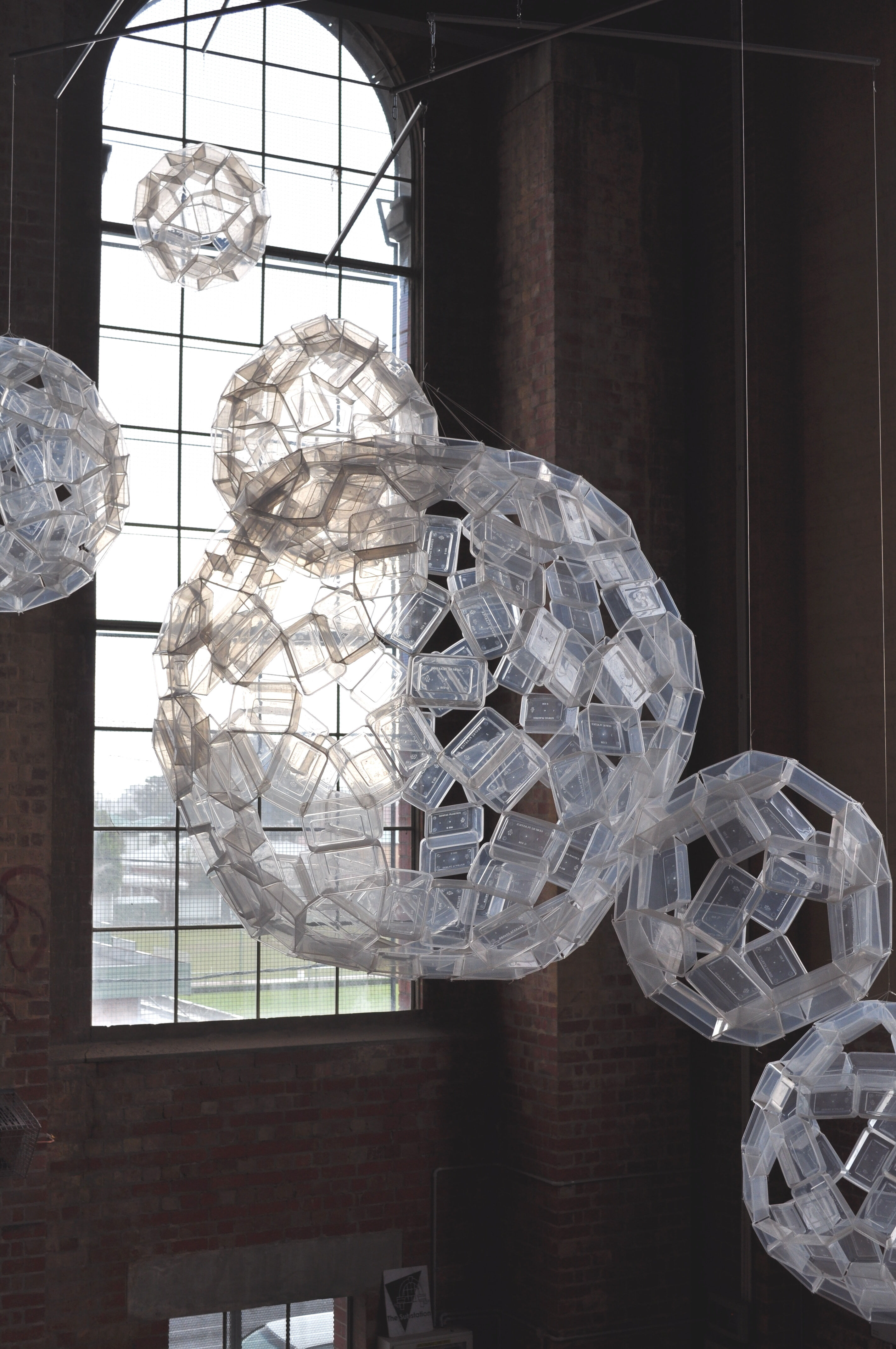 "Take(n) Away" was originally exhibited in the 2009 group exhibition "Sub12" at The Substation in Newport, in the west of Melbourne. Following this installation, the artist was invited for a return showing of the work in the spectacular soaring multi-storey foyer of the same venue, where it hung for four months. Images from both installations are shown here.

In my studio the other day, a friend asked if I’d had to work out the mathematics of the objects I was creating for TAKE(N) AWAY.
“Not really”, I said “ - didn’t you make cubes and pyramids and stuff out of paper and cardboard when you were a kid?”
He shook his head.

The conversation made me realise that I was the sort of child who stuck together with sticky-tape laboriously cut-out pieces of paper to make the three-dimensional forms (triangular pyramid, square-based pyramid, cube and so on) - and that not everyone else was.

Another inspiration for me is the common but unregarded item - in this case the plastic take-away food container, unlovely and un-loved, that fills kitchen cupboards, recycling bins and landfill sites across the country. These everyday articles - whatever they might be - hold a peculiar fascination for me, en masse. There's a self-imposed constraint, too, practical as well as conceptual, that the materials I use are (and must be) easy to find and cheap to buy.

And it’s a small form of subversion to use or mis-use an object, and release it from its everyday function, while discovering in it a hitherto unsuspected aesthetic quality. Dull practicality cedes to the unpredictable, the less serious, the more interesting.

TAKE(N) AWAY is an answer to the questions:

What happens when I play around with take-away food containers?

How do they fit together?

How do I encourage them to express themselves?

But the forms and assemblages call to mind other things as well, by their visual resemblance, through the materials of which they are made and in the way they are put together- and because we humans like to, or can't help but, think and see patterns and make connections.

The exhibition title describes the materials used (take-away food containers), and refers to the fact that they're taken away from their usual role and function in our lives. It also alludes to the possibility that the viewer hopefully - might be momentarily taken away themselves, from a former electricity substation in Newport, to somewhere else altogether.