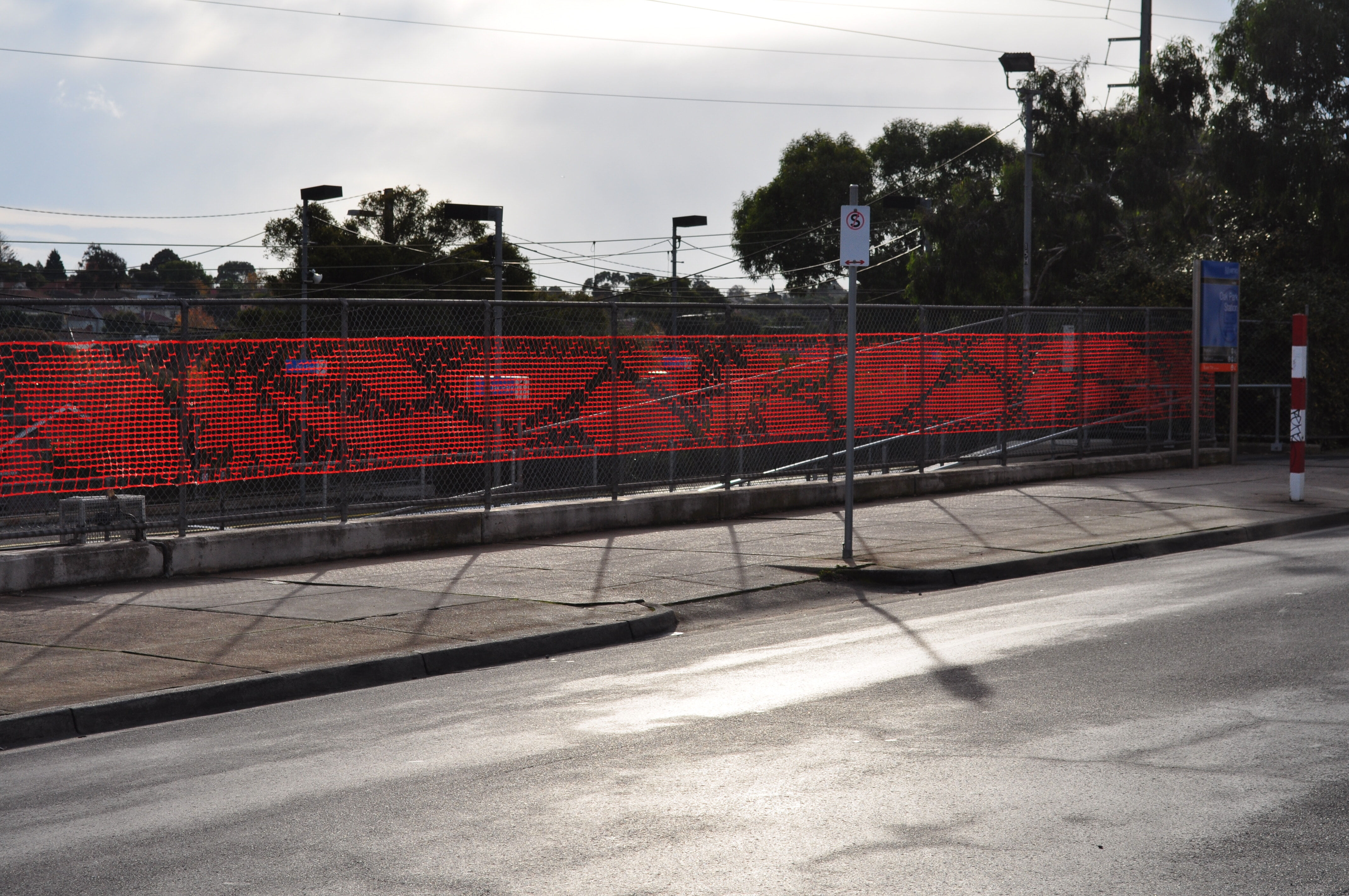 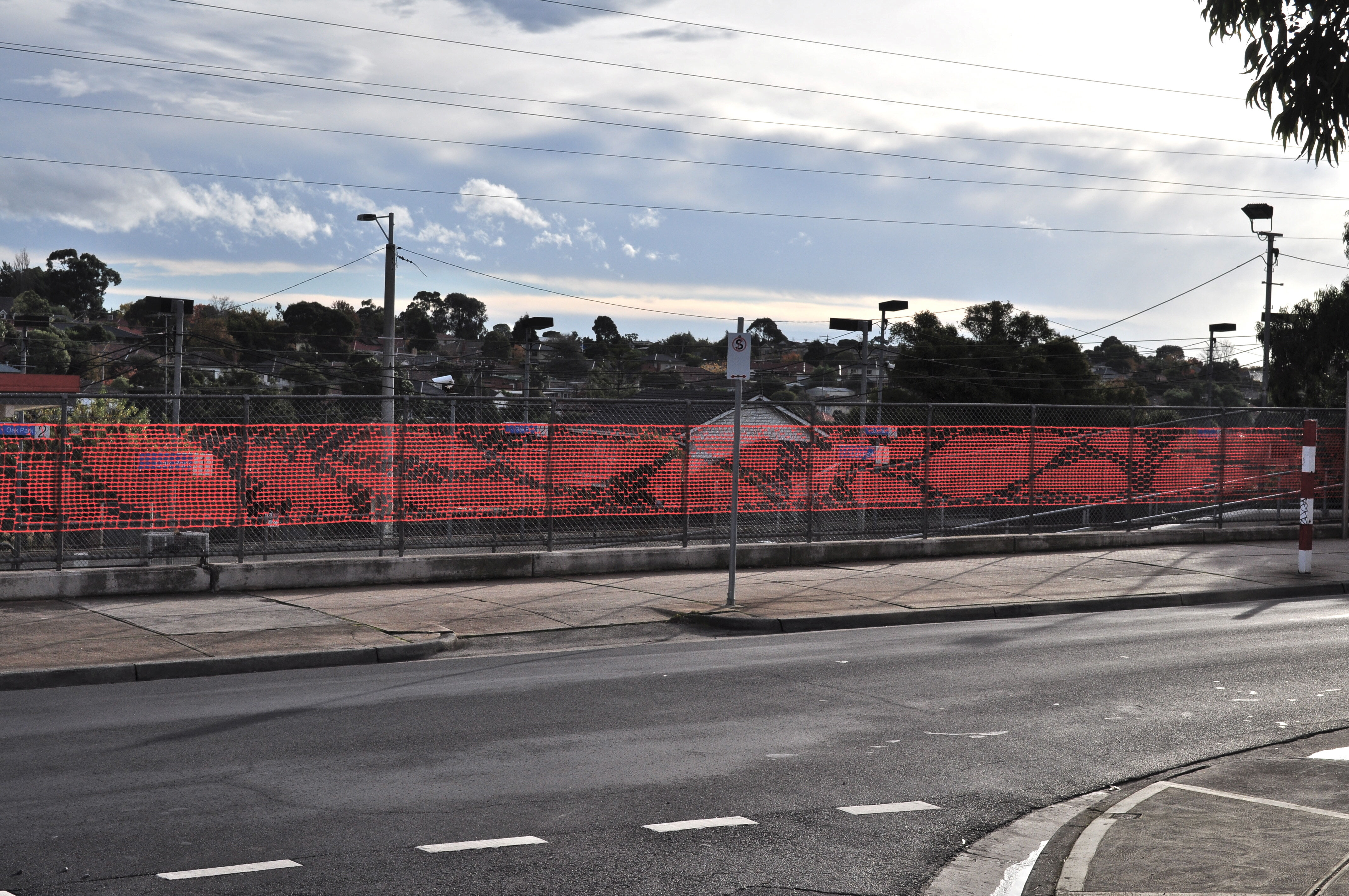 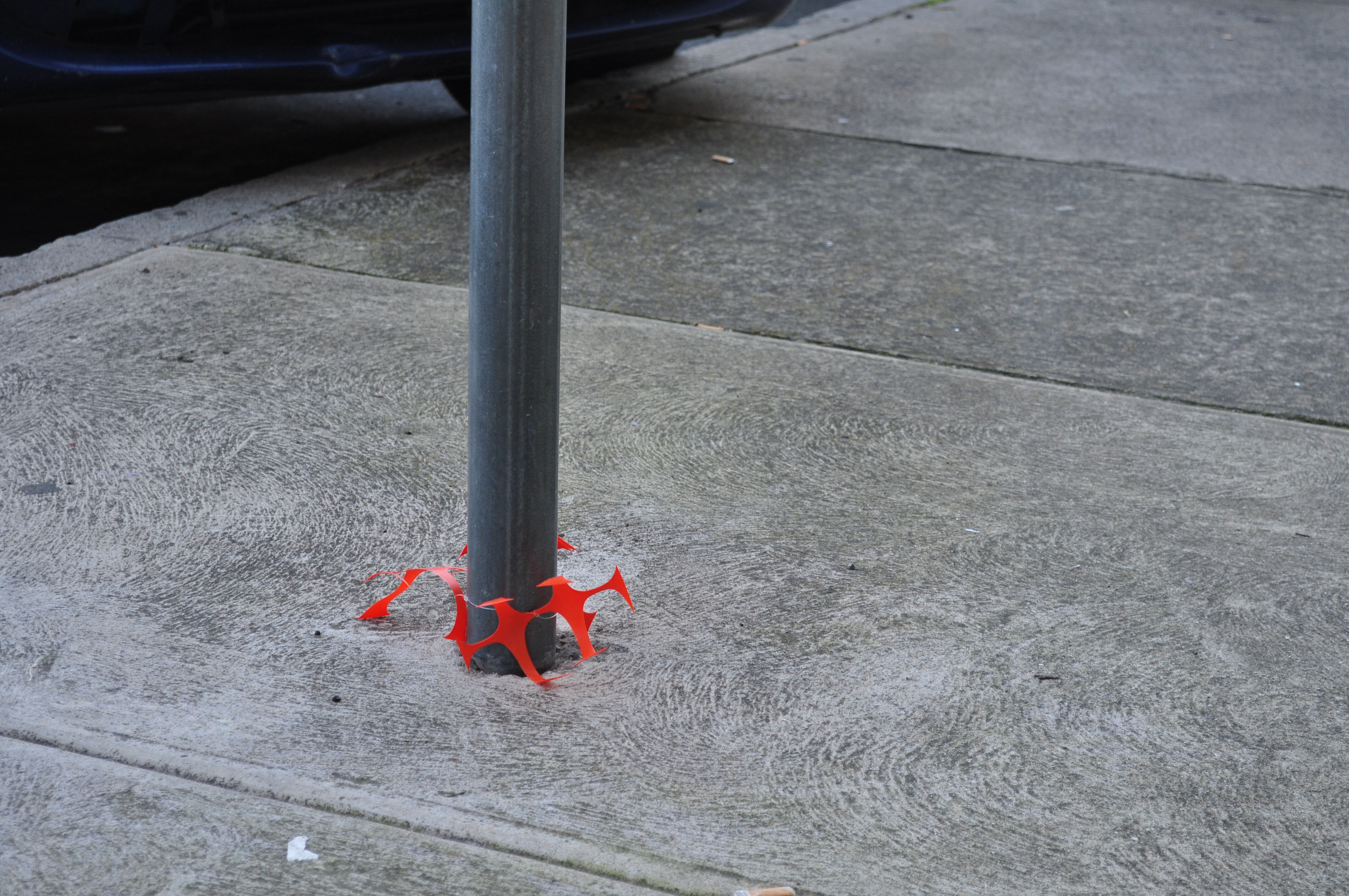 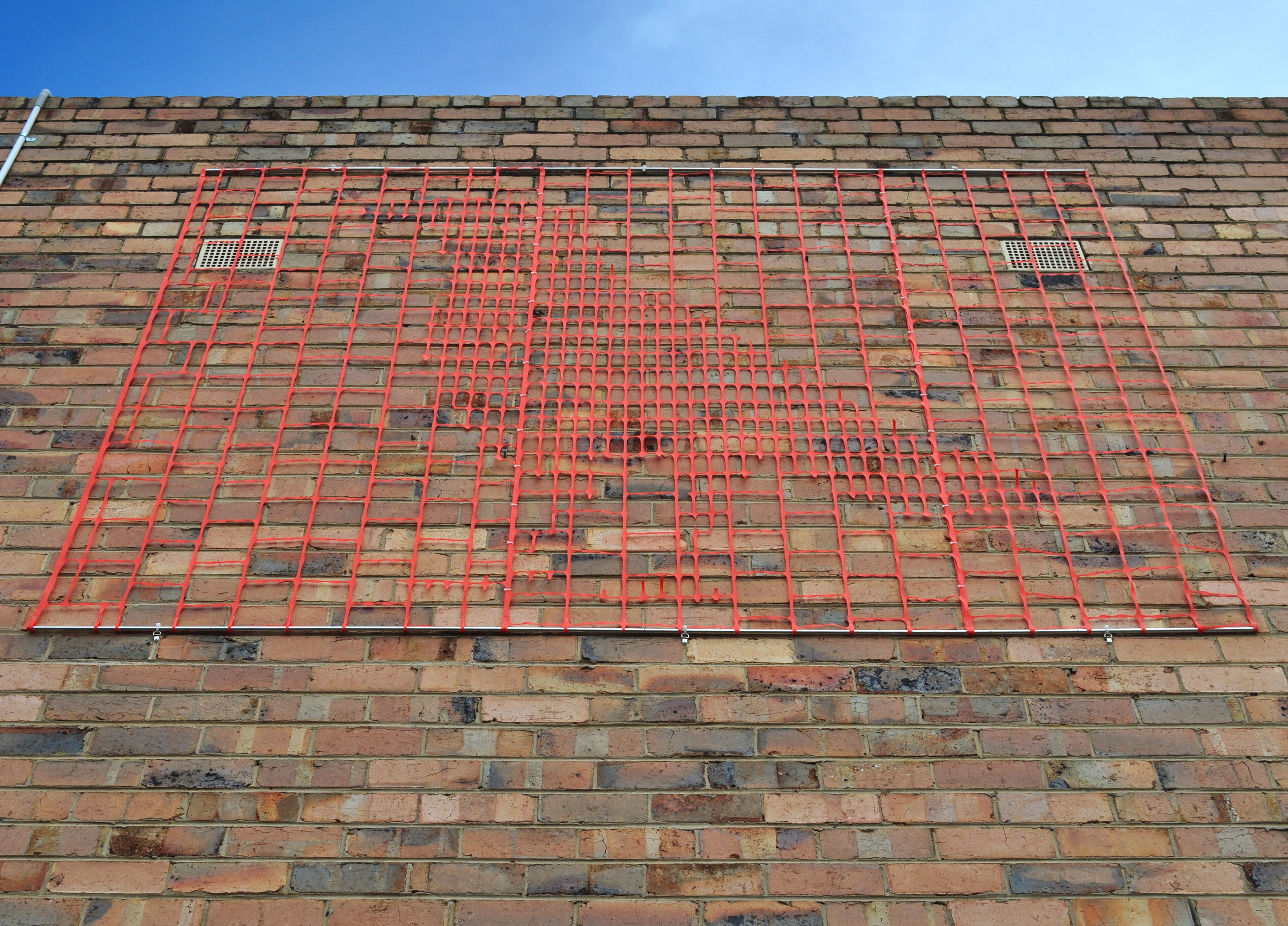 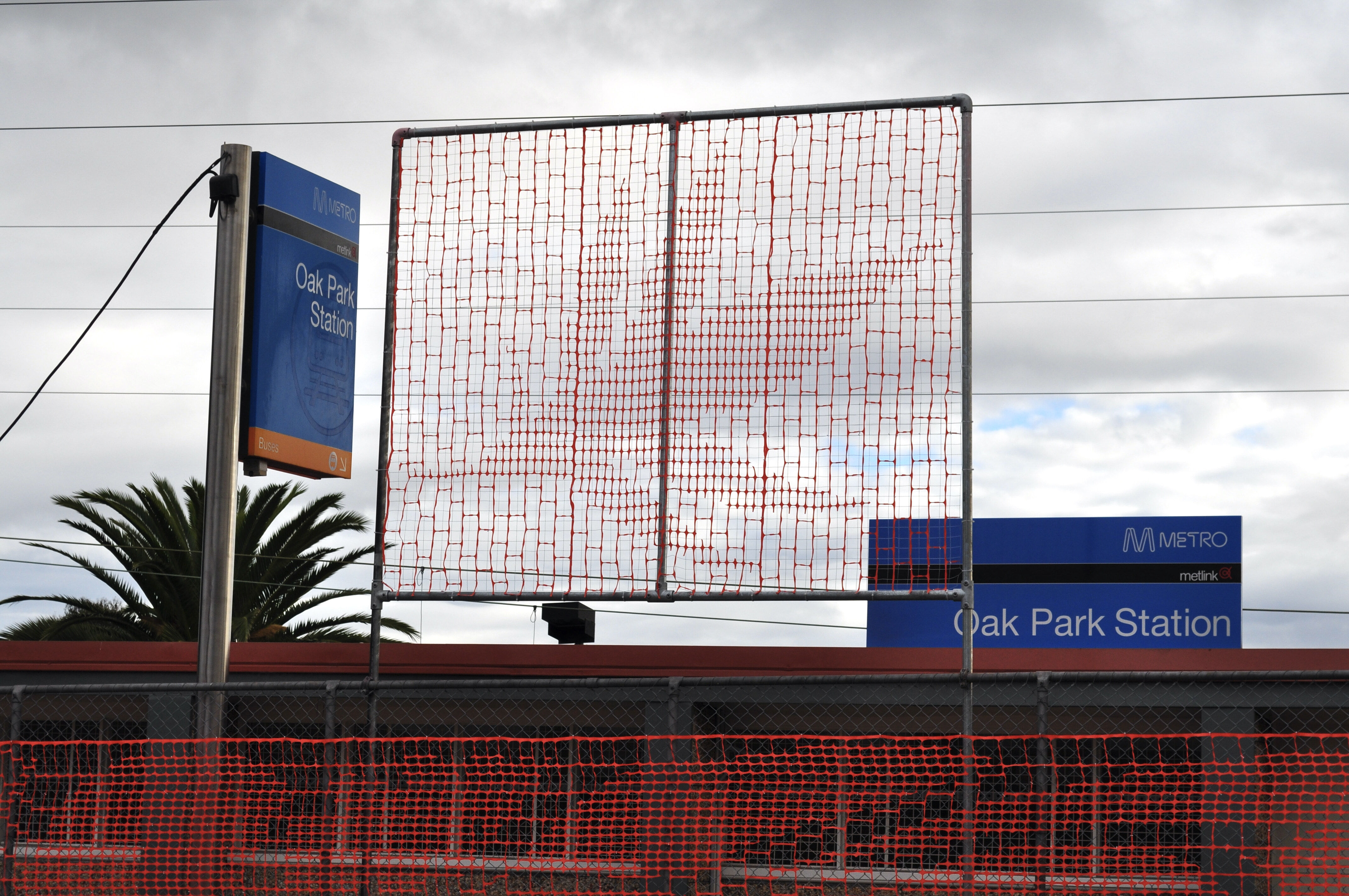 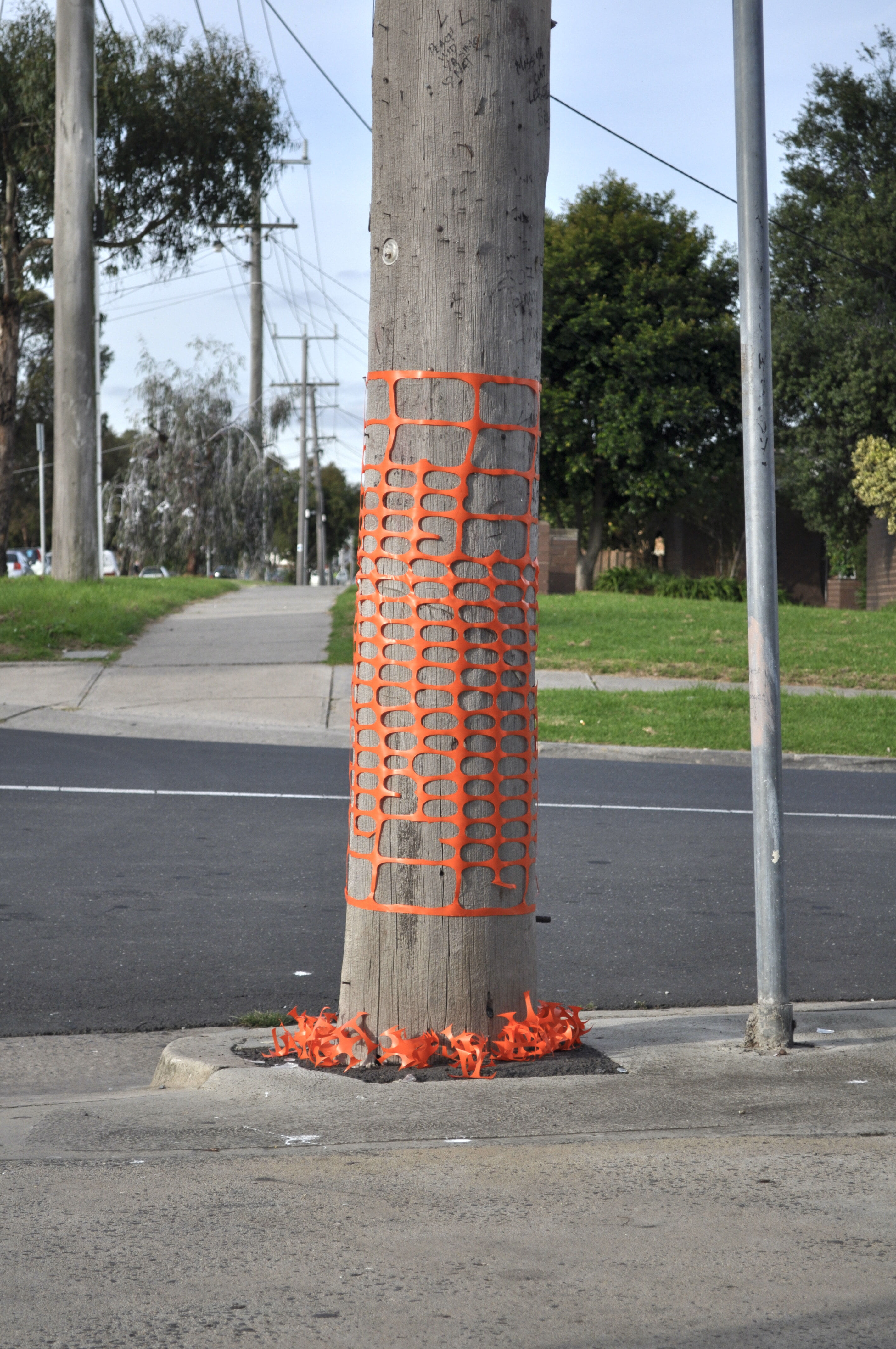 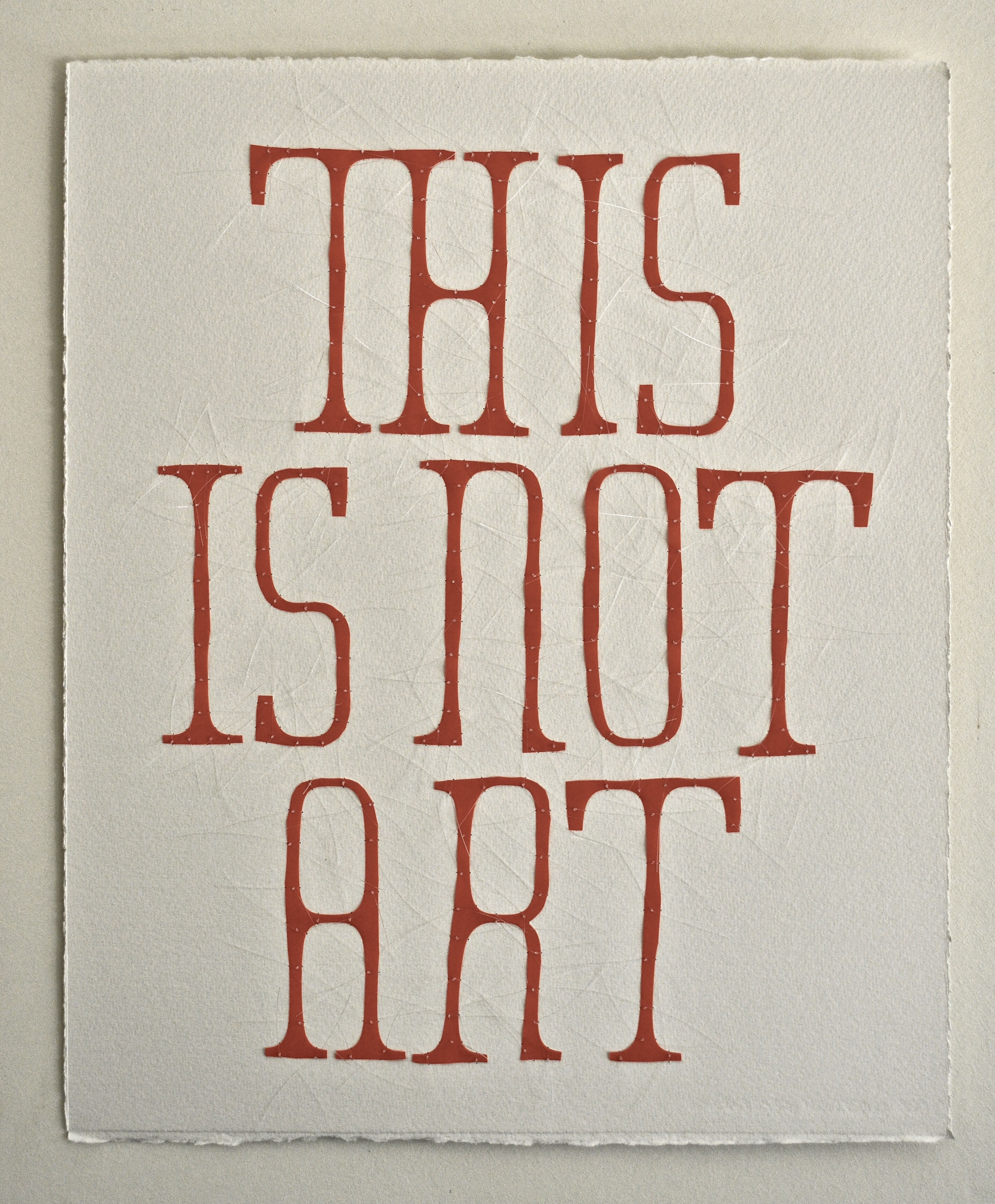 Tim Craker's new suite of works of art, the "Permeable Barrier" series, is being installed in and around the Snell Grove shopping strip in Oak Park throughout May, as part of Moreland City Council's ongoing public art project, Public Works Art-On-Site. Designed to be seen with, and installed alongside, the council roadworks and other improvements to the area's amenity, the "Permeable Barrier" series has been created from an everyday, usually unnoticed, humdrum material - orange plastic safety-fencing.

Following Tim Craker's use of this material in his "Botanical Data File" series (2008), exhibited in Kuala Lumpur, Singapore and Melbourne, the "Permeable Barrier" series further explores both the material itself and its possibilities for display, in an extensive outdoor intervention in public space.

Delineating images within the plastic webbing, not by adding material or detail but by subtracting from the grid through judicious excision, Tim Craker reveals images - the silhouettes of objects, birds and botanical specimens - within the man-made plastic.

The images which may be discerned include the leaves of trees and plants native to or growing in (and collected from) the local area  - eucalypt and wattle, kangaroo-apple and the purple coral pea. Oak leaves are also shown, with reference both to the suburb's name, and to the presence of various exotic species from elsewhere in the world. Birds indigenous to the locality - the crow and the wedge-tailed eagle - are represented, both being of significance for the original inhabitants of the area now known as Oak Park. The teapot and teacup also appear, as emblems of European colonisation, as symbols of domesticity and with reference to the social aspect of a local shopping centre as a meeting place. (In a nice conjunction, the leaves of the indigenous purple coral pea can be used to make tea.)

The background design in the mesh surrounding the images is in some cases a brick pattern (either horizontal or vertical) which makes reference to the brickworks which formerly existed in the Oak Park area, in the early days of European settlement.

Not all of the images in the works are easily seen: the suite also plays with the loss of recognisability as the resolution of an image decreases, akin to the number of dots-per-square-inch in a printed image becoming too few to carry the image any longer. When seen against a clear background, or from a distance (and especially in photographic reproduction), uncertain massed detail coalesces into something identifiable.

Confounding its normal use, the orange plastic safety-fencing of the "Permeable Barrier" series is displayed in both expected sites and in more unusual situations. There is a play between function and decoration - between the utilitarian and "art" - with the real plastic barrier fence around the actual public works echoed along the station fence, around street tree plots and high up on the brick walls of shops. If the installations make the casual viewer look twice, and think again, then the artist's aim has been achieved!

There's also a contrast between the natural object (leaves, birds) and the unnatural, non-biodegradable material in which it is depicted. These plastic autumn leaves, fallen from the works, are not going to become mulch and return to the earth to nourish the next generation of plants and animals.

The barriers themselves - constructed from a material originally intended for warning, protection or prevention - are indeed more than this. They carry images of ambiguous intent, and while permeable to the air, to rain and wind, they are perhaps also permeable to new and different meanings for a banal and everyday material - and even to some poetry and history in a local suburban shopping centre.

The "Permeable Barrier" series was part of the Moreland City Council's public arts program Public Works: Art-on-Site. I had been invited to submit a proposal to the Council some twelve months earlier, and my project was given the go-ahead towards the end of 2010.

Duly installed in May, 2011, the work attracted some notoriety because of inflammatory comments to the media by the Mayor of Moreland, Cr. Oscar Yildiz. Newspaper reports of the time quote him as saying: "A bit of mesh that utility companies use to cordon off areas - to call that art is a load of rubbish" and "I've got a seven-year-old daughter and she could have done this for free and done a better job" - an outburst of depressing familiarity, hardly supportive of his Council's public arts program, and fairly offensive to me, the artist. The sticking points for Cr. Yildiz were apparently that artists should be paid for their work (vision, experience, education, labour and expertise) and that contemporary art has moved on slightly from his ideas of what art is, and what it is for.

I'm not sure that Cr. Yildiz viewed the work in its entirety (certainly the newspaper photos accompanying his comments were not representative of the work as a whole) nor read my artist's statement which aims to provide some "entry points" to understanding and - even - appreciating the work.

There was a concern expressed in a media report - I can't remember which particular article - that the large leaf-silhouette work represented a marijuana leaf. In fact it's a leaf of the Kangaroo Apple, Solanum aviculare, native to the area. Safety issues were cited as a reason for the major panel to be taken down some days after it had been erected, after the media "storm in a teacup" erupted.

Unfortunately the controversy (aka "media beat-up") is nothing new - the news archives are full of "public outrage" over art on which public money has been spent. I just happened to be the latest recipient of quite surprising ire and vitriol from unknown members of the public via e-mail, and also - unexpectedly - found myself in a media circus having to defend not only my own work, but the whole of contemporary art from the beginning of last century until the present day.

It's said that no publicity is bad publicity - and while it felt pretty bad at the time, perhaps I should be thanking Cr. Yildiz for his part in my career...

The final image shown here, of work titled  "This Is Not Art (for O.Y.)", was made in 2017, as a long-delayed response to the previous controversy. It's made from orange plastic safety-fencing, cut into letter-shapes and tied down onto heavy paper with multiple visible knots of nylon monofilament, with vague reference to Magritte's famous work "The Treachery of Images" and its inscription Ceci n'est-pas une pipe.