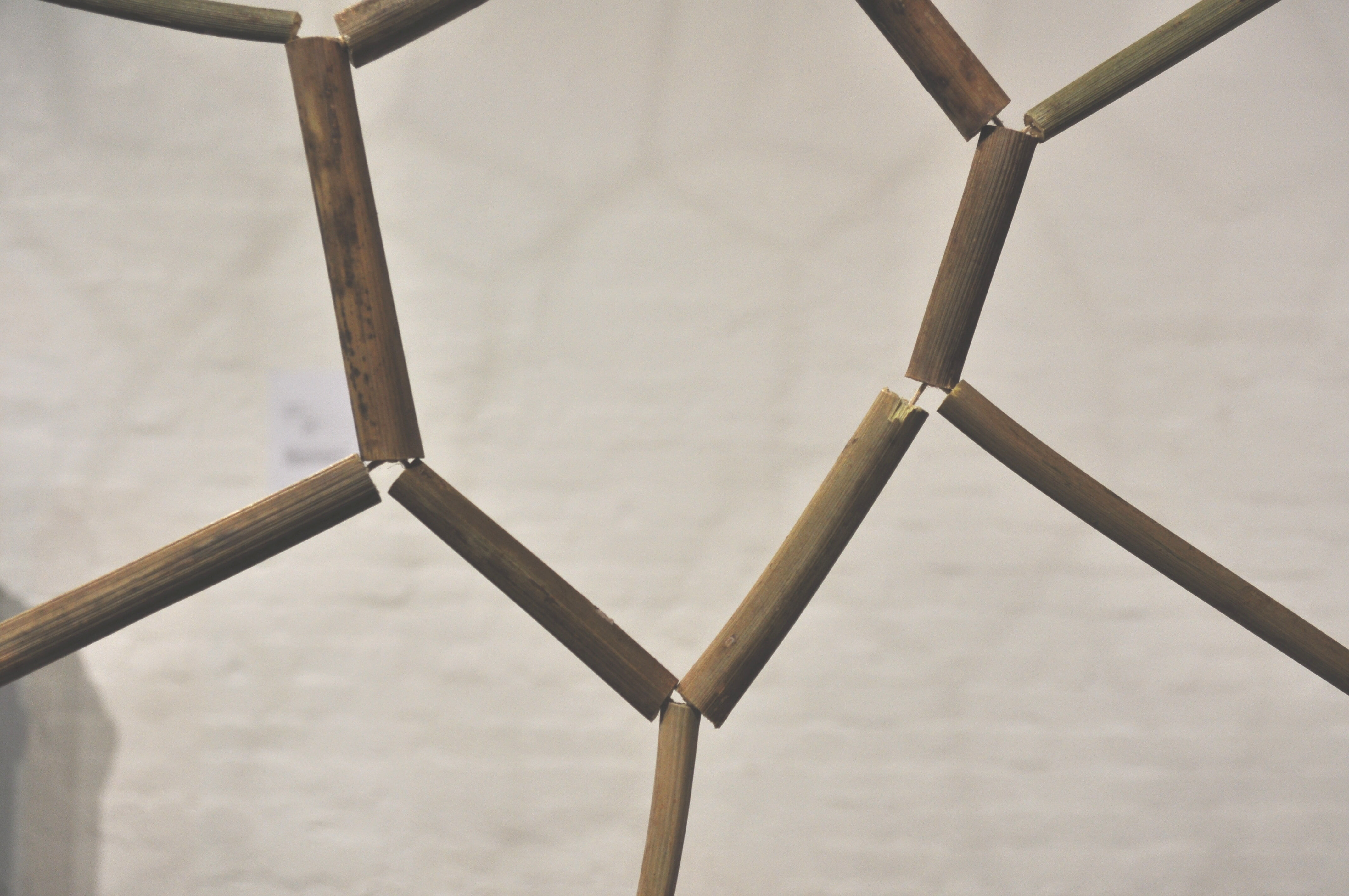 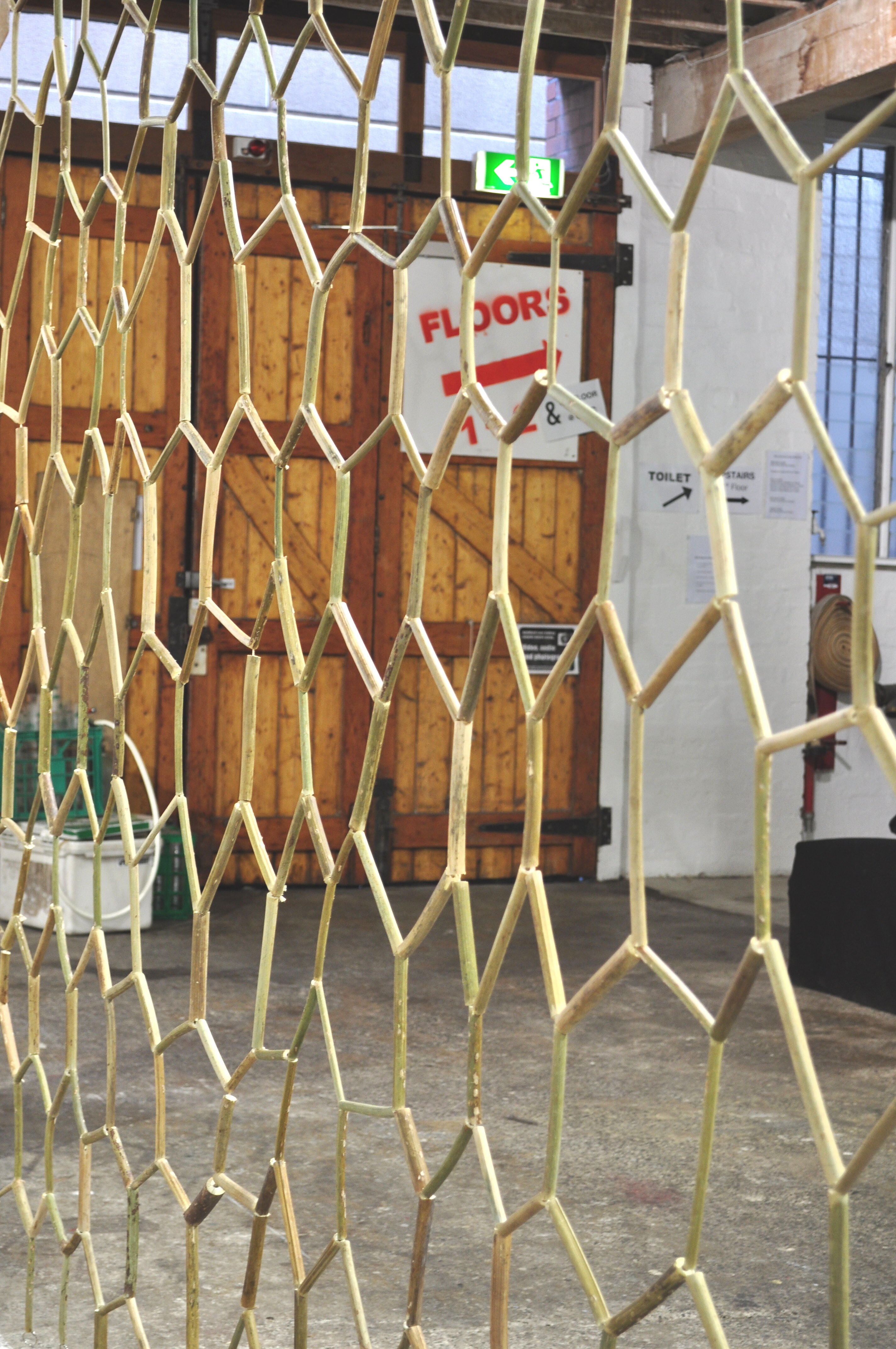 "Web (detail)" is a large suspended net made using sections of wild fennel stem. Fennel - a weed growing wild on vacant blocks and railway sidings, and an abundant natural found material, newly-discovered by the artist - has been harvested, dried, sectioned, drilled, threaded and tied into a huge irregular assemblage. The work is of ambiguous and multiple meaning, but references both geometrical perfection and organic imperfect reality, in an aromatic take on a web that might in fact be world-wide.

This is a difficult work to photograph in situ, being a completely see-through lattice behind which the visually busy gallery environment is all too prominent.

When I was at high school we had a biology textbook called The Web of Life. It was a thick book, with - from memory - a tawny frogmouth photographed on the cover. It was heavy to lug to and from school in my vinyl school-bag, and I always cringed a bit at the corny title.

Fennel - Foeniculum vulgare - is a pungent, feathery-leafed weed, an invasive species (though with an edible variety - F. vulgare var.azoricum) which in Australia grows in clumps by railway lines, on building sites and on vacant blocks. I began collecting fennel stems some years ago, drawn to their length, lightness and strength -  especially when dried - and by their scent. I also recognised, and was attracted by, the abundant seasonal resource both un-utilised and free for the taking. I just wasn't sure what to do with them...

Initial plans for an indoor flower arrangement didn't work out, due to the rather pungent aroma and prolific dropping of seed, so the long stems were banished outside, where they dried out. The stems were then trimmed, to reveal elegant segmented rods, progressively narrowing in diameter, and deviating slightly, at each node - and retrieved for indoor display.

And that's where they stayed - embodied potential, but to unknown ends.

Fast forward to early 2010, when for some reason my collecting of fennel stems began to get more serious, with a crop of fennel in a local vacant lot drawing my eye every time I passed by. Several car-loads later, and with the discovery of further rich pickings down by the Maribyrnong River, I had a studio full!

At that stage I was assembling white plastic drinking-straws into large irregular hexagonal nets (see my work "Cloud Net") in the studio -  experimentation and play that leads into the recognition and production of more serious art work. It was then, after other experiments with the whole stems, that I began to cut the fennel stems into their segments with a sharp pair of secateurs, to see where it would lead. Many of the stem segments had a hollow core - so were asking to be strung together in some way and, particularly with the exhibition Adaptation in the wind, it seemed a natural step to interpret the plastic-drinking-straw-net in natural materials..

So the work is - in inspiration - material-based, the result of collecting available, affordable basic units en masse and seeing what they are capable of, how they can be assembled, what they can do.

There's a fascination - which carries over into my current paintings - with pattern and regularity. In the Islamic world, such visual design is seen as the manifestation of an infinite pattern extending beyond the visible world, and which thus hints at the ineffable.

There's the satisfaction of using an unrecognised substance that would otherwise go to waste, a natural and aesthetically-pleasing found material.

There's the excitement of creating something vast and also unpredictable by following simple rules of combination using many small, similar units.

Most of all though, there's the thrill of the irregularity and imperfections that result in such a project: far from (and far more interesting than) geometric perfection, this hexagonal net sags and stretches, swells and crumples. It's biology writ large, a massive cellular structure, aromatic and multi-hued, assembled according to genetic prescription, to be eventually reclaimed by nature : a net, a trap, a map, a web, of life.